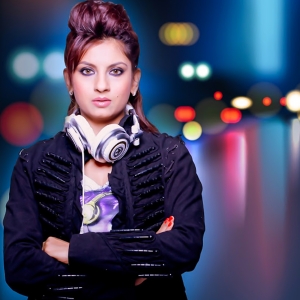 DJ RINK The way ls like her, as a Lady architect of contemporary music or the Desi DiVa, or one who adds a fanfare to the IPL Extraa Innings 2013. Just like her album she is the most acclaimed, loved preferred and adored music woman in the fields.

There is a hidden talent which has evolved over the years and is now being launched with great fanfare at the Country. She is a 21st century character titled “Dj Rink”. Rink is someone who turns everyone pink with her aura, and key thing being with the nature of tracks which she plays and composes.

Rink is a root in the entertainment industry since many years. She by profession has organized various Musical Events and DJ events in the country. She also happens to be a Sound Engineer /Remixer/ Producer/Dj . She has been DJ’ing at the most renowned clubs in India and internationally.

She has Debuted her Very Popular Album Called “LADY ARCHITECT” IN THE YEAR 2008 and Another Bollywood Remixes Album called “DESI DIVA DJ RINK “ in 2011 which is already a Super Hit Across the Globe. Locally she has been spinning her music at various events, clubs, college festival, corporate parties and launches and to add to it is a prominent face in media world.

She has also featured in video tracks of DJ Remixes and been interviewed by various Radio channels and her performances has made a mark in various newspapers around the globe. As Now, She has been “Ranked As # 3 DJ in Bollywood music” Category and Ranked # 22 in all over India rating and Hence She Stand #1 Female Dj of India in Bollywood category In Entire India As Per www.myfavdj.in — visit for more info.

DJ’ing was a passion which she lived with, To master the fineness of this DJ industry began. She learnt her DJ course in India from A and A under the guidance of one India’s first and most senior DJ, Joe Azerado. Rink-With the sound knowledge of electronic music, she has her hands in almost all the genres of music. From House,Electronic, Hiphop, Bhangra and Our Own Bollywood commercials to world music, one can definitely say that she has the perfect combination of taste and sense for the music. Over the time she has been playing some of the vibrant Bollywood numbers all across the globe and she is now recognized as a “Best Bollywood Female DJ”. While Mixing and Blending the music she comes out with the real superb experience for the party animals.

Rink has completed her course in Sound Engineering and has been certified by the Institute of Government Poly Technic (Bandra) Mumbai. During this course Rink has learnt about numerous music production softwares and sound recordings. After few years of spinning at some of the top clubs in the country and abroad she has taken a step forward and escalating her talent to the next level. She has most recently composed one of the most groovy and jumpy mixes. DJ Rink promises to produce some more peppy numbers in the forthcoming years taking music to a different level.

India’s No#1 Online Platform For Djs. We Promote Indian Djs & Their Remixes Free Of Cost.
All Remixes Are Strictly For Promotional Use !